Philip Muruthi is African Wildlife Foundation's Vice President for Species Protection. He has worked with AWF for over 20 years, facing conservation challenges from a broad perspective. His role is to deliver strong and appropriate conservation science inputs to AWF's integrat ... More

The hippo has two habitat requirements: waters deep enough to cover them entirely — their thin epidermis and lack of sweat glands expose them to rapid dehydration out of water — and nearby grasslands where they can graze. With the rising demand and competition for water resources, plus land conversions to provide space for infrastructure development, human settlements, and intensification of agriculture, the hippo is in a very vulnerable position.Habitat loss is not the only threat to the long-term survival of the species. Illegal and unregulated hunting for hippo skin, meat, and especially its ivory, is emerging as a significant driver of population declines. Though international trade in such wildlife products is regulated, it can be the platform that facilitates illegal offtake of species from source countries if mismanaged.

As a free port, Hong Kong has been a hub for international wildlife trade — both legal and illegal. Among the illicit elephant tusks, pangolin scales, and rhino horns intercepted by customs officials at Hong Kong’s ports, hippo teeth are fast becoming a common find. Not only are the incisors and canines of hippos easier to smuggle, they are significantly cheaper and readily used in the carving industry. Over the years, millions of consumers have traveled from mainland China to take advantage of the lower prices on luxury wildlife items, and this influx is growing with its domestic ivory ban taking effect in January 2018.

Even before China instituted the closure of domestic ivory markets and its ivory carving industry, African hippo ivory was in high demand. Up to 90 percent of the 771,000 kg of hippo ivory traded internationally since 1975 was imported by Hong Kong. Almost three-quarters of this ivory originated from just two East African countries — Tanzania and Uganda — but trade with Malawi, Zambia, and Zimbabwe is also on the rise.

Recent investigations into international trading patterns of endangered wildlife species have revealed vast discrepancies in the amount of hippo ivory leaving source countries and the volume declared on entry in Hong Kong. Biological scientists at the University of Hong Kong compared Uganda’s export permits and import receipts from 1995 to April 2016, estimating the volume of unaccounted hippo teeth to be just over 14,200 kg. This volume of ivory is the equivalent of 2 percent of the continental hippo population currently estimated at 115,000 - 130,000 individuals. 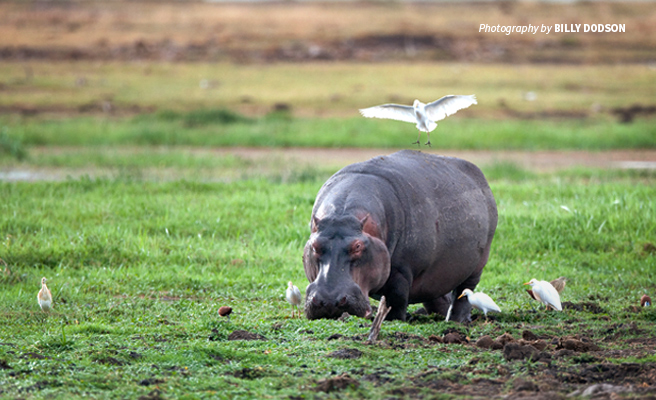 Like African elephants, hippos are classified as vulnerable on IUCN’s Red List of Threatened Species. However, unlike African elephants, hippos are relegated to a lower international protection status even though they are also increasingly sought after as a source of ivory to fill insatiable demand from ivory consumers. Listed on Appendix II of the Convention on International Trade in Endangered Species of Wild Fauna and Flora, hippos are primarily protected by hunting regulations and trade quotas which are not standardized across African range states whereas elephants receive higher levels of international protection and attention because of their Appendix I status. So far, Uganda is the only source country to ban trade in hippo teeth — but the trade volume study suggests that the 2014 moratorium simply shifted trade to the black market.

In the two years before Hong Kong imposes its domestic ivory ban, poaching syndicates are expected to increasingly target hippos for a legal and cheaper alternative to elephant ivory. Between now and 2021, when the domestic sale of elephant ivory will be outlawed, Hong Kong can renounce the use of hippo ivory in carved trinkets and jewelry to prevent smuggling across the Chinese border. Hong Kong can also protect Africa’s hippos from wildlife trafficking by expanding its elephant ivory ban to include hippo ivory and stifle the market in totality.

Without stricter trade regulations, the exploitation of hippos will continue unabated until it is too late for populations to recover.