Monkeys and Wolves Make a Last Stand Together 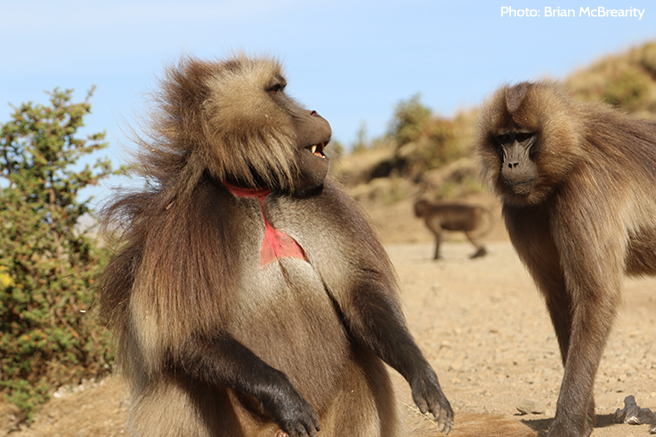 Earlier this summer I wrote about the Ethiopian wolf, the world’s most endangered canid with a worldwide population of less than 500 animals. Though a megafaunal predator balanced on the brink of extinction, the kind of critter that typically attracts a lot of attention from academics and conservationists, the remarkable hunting behavior of this wolf is just now beginning to be understood, thanks in part to a recent study.

The gelada (Theropithecus gelada) is a big beautiful monkey—not a baboon, which at 45 pounds and with a regal mane and intimidating canines it certainly resembles. This is the only grazing primate in the world, dining on grass 90 percent of the time, supplemented with various roots, flowers and herbs. Their greatest concentrations are in the Semien Mountains of north-central Ethiopia’s magnificent Afroalpine highlands, where the peaks top out at 15,000 feet and there’s more snowfall than almost anywhere else in Africa.

The gelada is also known as the “bleeding-heart baboon” for the exquisite hourglass-shaped crimson cravat of bare skin framed by white hair displayed on the chest of adult males. Their close relatives the baboons often have brilliantly colored rumps to advertise their sexual prowess, but the gelada’s unique method of feeding consists of scooting about meadows on its butt while collecting grass, so its personal ad stays up front where the ladies can admire it.

As grazers the gelada have adopted the ecological role that antelopes serve in lower elevations; this unique behavior (for monkeys) long ago attracted the attention of the Ethiopian wolf, which has molded its hunting patterns so as to benefit from the gelada’s grazing. This spring a paper in the Journal of Mammalogy concluded that this incredible interaction, in which hunting wolves are breezily tolerated by browsing monkeys—even those with vulnerable young—amounts to an astounding portrait of predator/potential prey benevolence, in which the wolf deliberately forgoes opportunities to snatch up an easy meal of baby monkey meat so that its preferred prey, rodents, accustomed to feeding freely in the presence of grazing lookouts, are more easily ambushed. Over eight years of research, the study’s authors recorded only a single (unsuccessful) attempt by a wolf to kill a young gelada.

The paper’s lead author, Vivek V. Venkataraman of Dartmouth College, says that the wolf’s behavior, while remarkable, is imminently logical from a predator’s standpoint, noting that, “our present results suggest that the primary benefit of being among geladas is avoiding the energetic costs of failed predation attempts.” The noise and disturbance of plucking grass made by a rowdy group of highly social primates is seen as offering a kind of auditory camouflage for the wolves, and they make the best of it. In fact, the researchers found that the Ethiopian wolf has adopted a slow and stealthy mode of hunting that serves two purposes: to sneak up on distracted rodents and to reassure the geladas that they are not themselves the objects of pursuit.

Why do the geladas put up with these carnivores in their midst, however benevolent? The researchers offer no conclusions other than to observe that, “there is no discernible cost or benefit to geladas from the presence of Ethiopian wolves, suggesting a commensal or weakly parasitic relationship between the species…” Perhaps the geladas, over slow eons of interaction, have collectively decided that the wolf poses no threat, and anyway all they’re doing is thinning out herbivorous competitors. The wolves could also possibly serve as olfactory sentinels against such genuine dangers as leopards, hyenas, dogs and people.

The gelada’s remarkable tolerance of predators is limited to the wolf; when feral or domestic dogs happens on the scene they trip the alarm, sending the entire gelada troop racing for the refuge of the cliffs where they routinely spend their nights out of reach of danger. The dogs come from encroaching pastoralists who mercilessly target wolves in the false belief that they pose a danger to their herds (in fact wolves have been observed hunting rodents amid grazing cattle just as they do with geladas). Dogs pose a distinct threat to both species, spreading rabies to the wolves and actively pursuing the geladas.

With one of the most rapidly growing human populations on the continent, Ethiopia’s remaining wildlife and unspoiled vistas are increasingly under threat of annihilation.

Faced with the ruthless expansion of farms, roads and hungry people, it could well be that the gelada—whose hourglass insignia perhaps ominously brings mortality to mind—is simply willing to share these last scattered redoubts of freedom and wilderness with another natural component of the landscape, to assist, however passively, in the last desperate stand of the Ethiopian wolf.

William H. Funk is a freelance writer and documentary filmmaker with a passionate concern for the wildlife of Africa. With a background in environmental law and policy, he works whenever possible to promulgate stories and ideas that might serve to heighten public awareness and involvement in the preservation of the wildlife of our foundational continent.