Botswana’s Wildlife Conservation and National Parks Act (or the Wildlife Act) enforces the protection of wild species and natural habitats, with a particular focus on keystone species slaughtered for the illegal trade in wildlife products. Offenses against rhinos attract both the highest fine — BWP 100,000 ($ 10,000) — as well as the longest prison term of 15 years. Other offenses involving the illegal killing of wildlife, hunting without permits, trade in wildlife and wildlife products, and dealing in wildlife trophies carry high prison terms ranging from five to 10 years.

Penalties under the Wildlife Act involve a combination of fines and imprisonment. However, while the custodial sentences are quite high, the financial penalties are very low in comparison. It is, therefore, unlikely that the fines under the act provide a significant deterrent effect. Moreover, the legislation only provides for maximum penalties and, therefore, the judicial officer’s discretion is wide open. In Moremi and Others -Vs‐ the State (2009), the two appellants were convicted of unlawful possession of a government trophy — a wildebeest skin and some game biltong — and were sentenced to pay a fine of BWP 5,000 ($ 500). On appeal, the High Court held that in the circumstances of their case, the maximum sentence was disproportionate and manifestly excessive. The sentence was reduced to a fine of BWP 2,000 ($ 200).

In addition to fines and imprisonment, the Wildlife Act imposes forfeiture penalties. For all offenses under the Wildlife Act punishable by a fine of BWP 2000 ($ 200) or more, the law states that “any weapon, trap, animal, vehicle, aircraft or boat used for the purpose of or in connection with the commission of the offense shall be forfeited to the State.”

The High Court of Botswana has held that for an item to be forfeited, it must have been used to commit the offense. In Oatlhotse -Vs- the State (1993), the appellant was convicted and sentenced on a charge of hunting without a license. The Magistrate ordered that his vehicle be forfeited to the State. He appealed against the sentence imposed on the grounds that he had merely used the vehicle to give a lift to his co‐accused. The High Court held that there was nothing to suggest that the appellant had used his vehicle for the purpose of or in connection with the commission of the offense charged. Had the appellant actively taken part in the commission of the offense, the motor vehicle to have been liable to forfeiture. Notably, an item can be forfeited even where the accused person has been acquitted.

The Wildlife Act also provides for administrative penalties including the destruction of instrumentalities of crime and the cancellation of permits. Under Section 8, where any animal or vegetation is introduced into a national park, that particular animal or plant is subject to destruction; a fine and/or prison term is imposed on the offender.

The legislation further provides for higher penalties for repeat offenders with the maximum penalty being increased by 50 percent. Where the offense is in connection with a rhino or elephant, the penalty for the repeat offense shall be a term of imprisonment without the option of a fine. 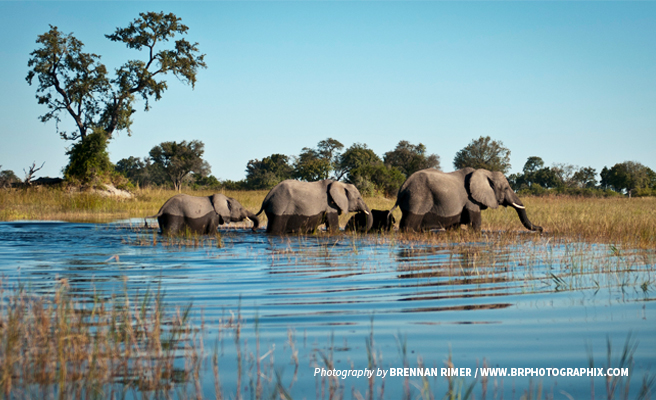 The upsurge of wildlife crimes in Botswana committed by persons from neighboring countries could be attributed to low penalties compared to penalties for similar crimes in other countries.

In the Zambian case of The People -Vs‐ Ben Simasiku, the accused person had been charged in Francistown, Botswana with unlawful possession of 17 pieces of elephant ivory weighing 115kg in 2012. He subsequently jumped bail and went into hiding, prompting Interpol to put him on their wanted persons list in Operation INFRA (International Fugitive Round-up and Arrest) Terra, targeting criminals who have fled their national jurisdictions. The Zambia Wildlife Authority, through collaboration with the Zambia Police, were able to arrest Simasiku on December 2, 2014 in Livingstone, Zambia. He was charged with being in unlawful possession of a prescribed trophy. If Simasiku had been extradited to Botswana to be charged, he would face a maximum fine of BWP 50,000 ($ 5,000) or imprisonment for a maximum of 10 years. However, if Simasiku is found guilty under the Zambian law he shall be liable to imprisonment for a maximum of seven years without the option of a fine.

Other wildlife offenses involving foreigners in Botswana include the case of State -Vs- Zhang and Another (2012) where the two Chinese nationals were found in unlawful possession of elephant ivory at Sir Seretse Khama Airport on January 15, 2012. The items recovered were imported from Zimbabwe and were in the form of jewelry. More recently, in February 2018, three Zambians and two Batswana were arrested by police in Botswana for the illegal possession of 11 elephant tusks. According to police reports, the five accused persons were intercepted at a veterinary checkpoint, leading to the recovery of nine elephant tusks that were stashed in their vehicle. A follow-up raid on their hide-out in the Gumare communal lands led to the recovery of two more elephant tusks, two pistols of undefined make, and 82 live rounds of ammunition.

Due to the low penalties under Botswana’s Wildlife Act, one of the aspects AWF’s Wildlife Judicial and Prosecutorial Assistance Training in Botswana aimed to emphasize is the “maximum force of the law” approach in charging wildlife offenders. This involves the use of all available legislation to increase the number of charges against offenders and, thereby, to create more deterrent penalties. Given that the legislative amendment process generally takes long, proposing amendments will not have an instant impact. Using the already available laws will act as a stopgap measure as calls for stronger penalties in the Wildlife Act are considered by Botswana’s legislators.

Other legislation that can be used to enhance penalties under the “maximum force of the law” approach include the Proceeds and Instruments of Crime Act enacted in 2014.  This law aims to deprive persons of property suspected to be proceeds of or instruments of crime and to deal with issues such as money laundering, racketeering, and other connected matters. This act introduces a system for identifying and forfeiting illegally acquired assets. It provides for conviction-based forfeiture as well civil forfeiture. Civil forfeiture ensures that property suspected to be proceeds or instrumentalities of a crime is forfeited using a lesser burden of proof than that required in criminal proceedings. The burden of proof is shifted onto the offender to prove the legitimacy of his or her property. Further, civil forfeiture is not based on the criminal trial process and this will enable forfeiture to be done within a short period.

In addition to the Proceeds and Instruments of Crime Act, Botswana also has in place several pieces of legislation that prevent corruption. These include the Corruption and Economic Crime Act which is the main anti‐corruption legal instrument, as well as the Penal Code and the Public Service Act.  These statutes are important because research has linked wildlife crime to corruption and weak governance structures. Therefore, as Botswana addresses wildlife crimes, it should also tackle corruption among officials to ensure that organized criminal groups do not have a window to continue buying off government officials to commit crimes.