Florence Louma is a happy woman. During the last cocoa harvest in early 2019, she made a profit of over USD $1,700, making her the top-earning female cocoa farmer in Kagnnole village, Somalomo, at the border of Dja Faunal Reserve in south-eastern Cameroon. At the fermentation shed she has rigged up inside her cocoa farm, Florence patiently stirs a huge drum filled with cocoa beans that have been fermenting for the past 48 hours. Bees buzz excitedly in the small space, attracted by the sweet fragrance of ripe cocoa.

“The cocoa has to ferment for six days, and you have to stir it every two days to ensure that the fermentation process is even. After you take it out [of the drum], you then spread it to dry before you package it for sale to brokers,” explains Florence, who just turned 30.

She picks a ripe cocoa fruit from a nearby tree, splits it in half to reveal the white juicy flesh inside, and passes it around. It tastes nothing like chocolate. Rather, it presents a pleasing mix of sweetness and sourness that brings to mind a cross between a mango and a banana.

A curious by-product of the fermentation process is copious amounts of ‘cocoa wine’ — a sweet, sour, and refreshing drink with the same flavor profile as the fresh fruit. Florence distributes all the wine she taps to her farmworkers as a bonus to their wages. She finds that this perk keeps them loyal and available even during the high season when demand for labor is high. 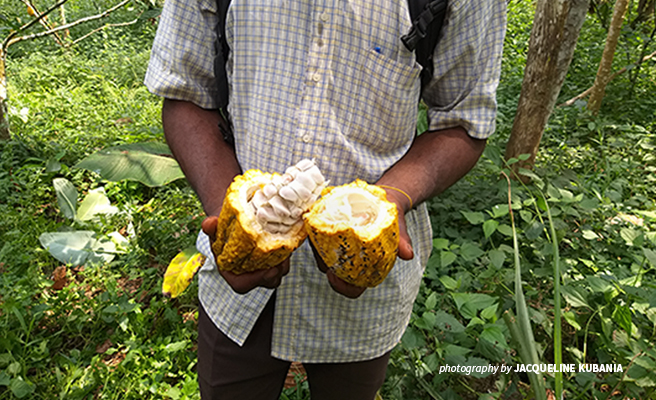 A prudent businesswoman, Florence has taken advantage of the intervention programs by African Wildlife Foundation and a local partner Tropical Forest and Rural Development to improve her crop yields and the value addition process. As a result, her produce fetches better prices when the buyers come.

“Before I started working with African Wildlife Foundation, my yields were low and the cocoa quality was poor,” ponders Florence, noting how she harvested mostly grade 2 cocoa that sold for lower prices than premium cocoa. Previously, Florence’s 7-hectare farm produced around 300 kg of cocoa that fetched, on average, XAF 450 (approximately USD $0.75) per kilogram. After working with AWF and Tropical Rainforest and Rural Development, her last harvest peaked at 1,301 kg — of which 982 kg was premium cocoa selling at XAF 800 (USD $1.35) per kilogram. She also produced 319 kg of grade 2 cocoa that sold at XAF 700 (USD $1.17) per kilogram, bringing her total revenue to XAF 1,008,900 (USD $1,704).

With her improved profits from cocoa farming, Florence is able to comfortably pay school fees for her children and recently installed solar panels on her house since electricity connectivity in Dja is poor. In addition, she has managed to build a decent grave for her husband who died in 2017 and it now sits proudly at the front of her house, covered in white and blue tiles, in the style of so many other homesteads in the village.

Florence is one of the 181 farmers currently supported by AWF and Tropical Forest and Rural Development in Dja. In exchange for improved farming techniques and access to markets, the farmers have signed agreements committing to promoting biodiversity conservation in the region.

The Dja Faunal Reserve, a U.N. Educational, Scientific and Cultural Organization World Heritage Site, sits on 5,260 sq. kilometers of dense tropical rainforest and is home to the forest elephant, western lowland gorilla, giant pangolin, and endangered chimpanzee. The reserve is currently facing threats from commercial logging, mining, agriculture, and infrastructure development — all of which contribute to habitat loss and fragmentation. In addition, human population growth at the periphery of the protected area has increased deforestation, exacerbating the impacts of poaching and the illegal bush meat trade.

AWF and Tropical Forest and Rural Development’s partnership in the landscape is focused on working with local communities to ease pressure on the reserve by ensuring that the dominant economic activities do not further jeopardize biodiversity.

“We provide the farmers like Florence with quality cocoa seedlings to ensure that — right from the start — we set them up for success. We help them access farm inputs such as fertilizer and pesticides and teach them better crop cultivation techniques including cocoa farm monitoring, says Tsafack Romaric, a Dja-based program officer with Tropical Forest and Rural Development. He continues, “We have also built a drier which speeds up the drying process and protects the cocoa from impurities, after which the farmers can store their dried cocoa in our storage unit. Finally, we provide the farmers with the necessary information about the current cocoa market situations (such as the current price per kilogram) and a scale balance to make sure that negotiations between the cocoa producers and the middlemen are fair.”

The project is preparing to scale up to extend services to others who have requested it. In exchange, the farmers sign a Reciprocal Environmental Agreement to refrain from participating in poaching, illegal wildlife trade, and illegal logging thus contributing to the conservation of biodiversity in the area. With the added boost in income, they no longer need the money from poaching and logging. 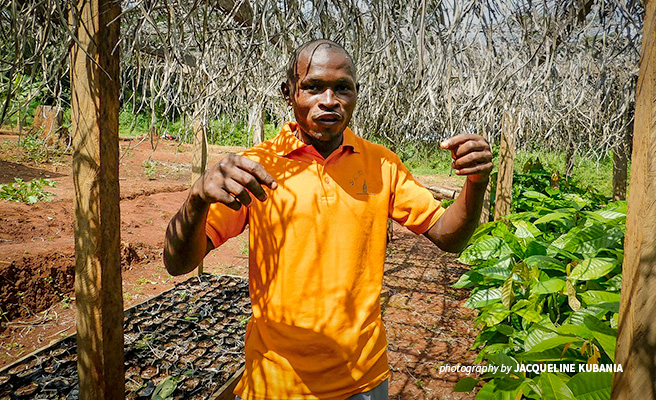 Boris Nguemo Serges is one such reformed poacher. The 27-year-old grew up trapping small animals such as mongoose and gorilla and selling them to sustain his family. In 2013, he started growing cocoa but was bogged down with poor yields and low returns. His first harvest in 2017, for instance, saw his 3-hectare farm yield only 60 kg of cocoa beans, which he then sold at XAF 500 (USD $0.84) per kilogram.

Discouraged but willing to give it another try, he signed up with the AWF-Tropical Forest and Rural Development program for support with farming techniques and value addition. His gamble has paid off. He recently harvested 105 kg of cocoa, which he sold at XAF 800 (USD $1.35) per kilogram since it was graded as the highest quality.

“I am now able to educate my children, pay hospital bills, and even put some money aside in a savings scheme,” says the father of seven. Tropical Rainforest and Rural Development also runs this savings program and so far has 25 members.

“Many of the people here are unbanked and are unable to take advantage of the formal financial system. We encourage our farmers to save a little of their earnings with us which we then hold for them until they need the money. In time, we would like to see this initiative develop into a cooperative society,” says Romaric.

This quid pro quo arrangement between the farmers and AWF-Tropical Forest and Rural Development has led to the formation of vigilance committees in 17 villages surrounding the Dja Faunal Reserve. The committees have been instrumental in raising awareness about the importance of natural resource conservation thus bringing about much-needed behavior change in the region.

“So far, the vigilance committees have led to the denunciation of several illegal activities, the reporting of poachers and bush meat buyers as well as the seizure of several hunting arms and hunting equipment and the release of a chimpanzee,” says Romaric.