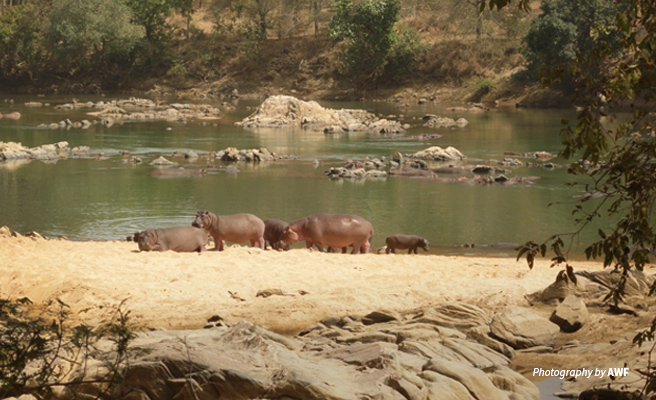 “Ngarkuwa.” This was the title bestowed on Manfred Aimé Epanda by Cameroon’s Tchamba chiefdom. Epanda, African Wildlife Foundation’s Cameroon country coordinator, has devoted the last two decades of his career to community conservation in his native Cameroon.Just outside of Faro National Park in the country’s arid and turbulent north, the council of leaders of Tchamba chiefdom welcomed him to their ranks, honoring him with the title of “Ngarkuwa,” or warrior.

Since its founding over 220 years ago, the state of affairs in Tchamba has changed. Epanda, though ecstatic about what his new title augurs for conservation in the conflict-ridden area is also aware of the responsibility he holds. “Nowadays ‘Ngarkuwa’ is advisor and leader when the council makes decisions concerning development. But in the primeval time, ‘Ngarkuwa’ was a defender of the lamidat, the person who leads his people in war,” he says.

Translating to a specific command territory of the chief (known in the local Fulani language as lamido), the lamidat is still a widely practiced and influential system of government in parts of Cameroon. The Tchamba chiefdom is home to more than 12 ethnic groups, as well as a refuge for groups fleeing Gulf War unrest in Chad since the early 1980s and, more recently, people escaping violent Boko Haram insurgents in the far-north. Altogether, they contribute to a mixed economy in the arid landscape — fishing occurs along the Rivers Faro and Deo, and subsistence growing is also prevalent. However, livelihoods depend largely on traditional pastoralism and other nomadic cultural practices.

The effects of climate change as a result of global warming are dire. The different communities settled in and around Tchamba are facing the brunt, leading to conflicts among the herders, gold miners, growers, fishers, non-timber forest products collectors — and conservationists too. “These are just a few of the land users scrambling pasture, ores, water, food, income, and land,” notes Epanda.

As part of AWF’s intervention in the landscape through the European Union-funded program in Faro is the appointment fulltime community development officer, who has helped plan and implementing alternative livelihood projects that promote sustainable natural resource management. Intensive collaboration with various representatives, ethnic groups, and other agencies are ongoing to ensure that the wider Faro landscape is an environment where wildlife and communities thrive.

For long-term continuity, AWF is training farmers and herders who will be in charge of implementing these livelihood activities. Epanda explains, “They will pass on their skills to the next generation. Also, AWF will educate children and women in conservation education.” 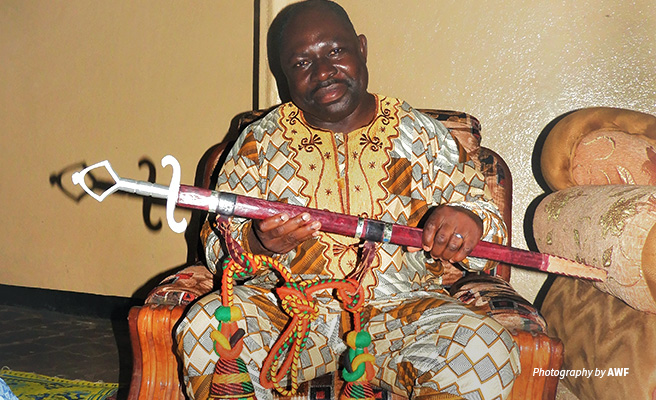 Recognizing AWF’s contribution to the community

The warrior title is given to an individual from any part of the world who has made or makes, positive and long-lasting contributions to the welfare of the community. For Epanda’s impact as a conservationist to reach Tchamba’s council of leaders tasked with selecting this individual is a source of immense pride. “Ngarkuwa” brings one closer to the chief — the most powerful spiritual and political leader — and the community as a whole. “It is humility, respect for elders and traditional customs, attitudes that have made me receive this honor,” ponders Epanda. But he also notes that AWF’s community-centered technical interventions in the sociocultural and ecological growth of the landscape also played an important role.

In a modern lamidat like Tchamba, “Ngarkuwa” represents the efforts of the bearer of title in improving the community’s socio-economic and cultural development, as well as strengthening their agricultural, ecological, and social resilience to climate change.

“My work with AWF helped me to be closer to the people of Tchamba through different missions such as the feasibility study, as well as project implementations and donor visits,” reflects Epanda, adding that no matter the time of day or the season, AWF has been there for the people of the lamidat.

The recognition adds immense value to AWF’s mission to empower communities through biodiversity protection across priority conservation areas. As Epanda explains, “The title to me is like a visa to reach all the traditional leaders involved in our efforts to conserve this critical landscape.” With strong partnerships at this level, AWF can facilitate communication with the neighboring Nigerian communities and implement strategies to mitigate threats felt across the transboundary region.

“AWF now has access to high traditional authorities in a context where the say of the chief is like a word of the Bible.” As both the warrior of Tchamba and AWF’s lead in Cameroon, Epanda is the link between two worlds critical for African development through conservation.

> Learn more about AWF's conservation strategy to protect wildlife and habitats in Dja Faunal Reserve, another priority landscape in Cameroon.