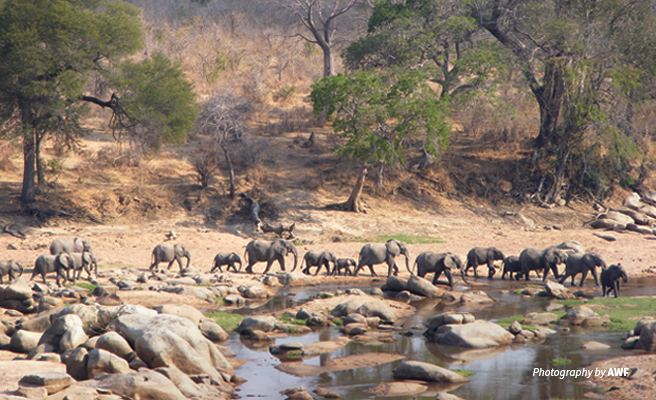 Until 1993, the Great Ruaha River, the main source of water for wildlife in Ruaha National Park, flowed in the dry season. Since then, between September and late November every year, sections of the river disappear resulting in water scarcity for people and wildlife as well as loss of habitat which is devastating for water-dependent species like the hippo. Over these low-rainfall months, some individuals of other large mammals like elephants and buffalos move out of the protected area, sometimes raiding human settlements and farmland as they look for water.

Apart from being the lifeblood of the national park, the Great Ruaha supplies two dams and critical conservation areas before it meets the Rufiji River. From its headwaters in the forested highlands of south-central Tanzania, it feeds a fertile region forming part of a strategic agricultural growth corridor intended to drive the country’s economic development. However, the country’s largest private irrigated rice farm used up over 30 sq. kilometers of Ruaha’s wetland in the Usangu plains and diverted a significant amount of water for irrigation.

As more irrigated commercial agriculture projects and smallholder farms mushroom around the river and its tributaries, the Great Ruaha’s already-reduced supply is becoming increasingly contaminated with chemicals from pesticides and fertilizers. The quality of natural water sources suffers further with limited local infrastructure for livestock, forcing farmers to use rivers and streams for their animals. 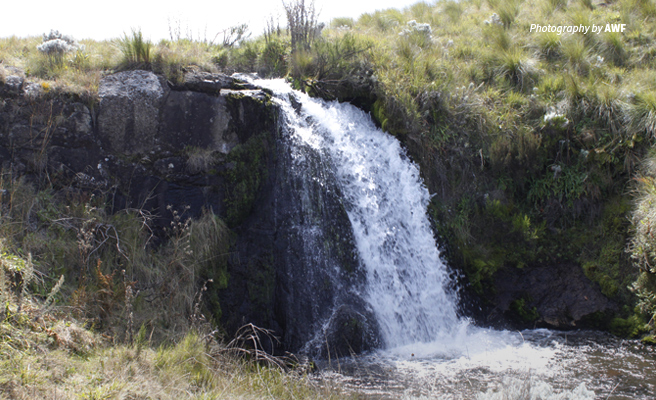 Before the intensification of agriculture and growth of human settlement, the Great Ruaha’s upstream catchment area stored enough water to flow all year. But in southern Tanzania, as in many parts of Africa, the demands for arable land, grazing, forestry, wildlife, tourism, and urban development are outstripping the land resources available.

In the higher catchment of the Great Ruaha, farming communities depend on the forests and streams making up the wetland. Working closely with local stakeholders and wildlife protection agencies, African Wildlife Foundation is developing a model for strengthening smallholder agriculture and water management that can be applied throughout the Southern Agricultural Growth Corridor of Tanzania.

Training in ecologically and economically sustainable production technologies plus water management ensures that not only are smallholder farmer incomes and food security improved but also that communities are empowered to become custodians of their natural resources.

In one of the project sites, there are over 400 natural water sources outside of protected areas. Our assessment revealed 16 of these that were highly degraded and prioritized for rehabilitation. Twelve were demarcated by special beacons to mark their legal boundaries and community members organized into water user associations received education on the water act and local by-laws. To restore these water sources, locals obey the buffer zone of 60 meters from the edge of a water source or river bank and also planted over 60,000 seedlings of water-friendly trees like figs and wild mangos.

Similarly, the project targeted communities in these sub-catchments to keep water quality at acceptable levels and maintain the level of flow in the main rivers. So far, we have trained eight water user associations and provided them with the necessary equipment to assess river water quality. Assessment results are positive, with rivers meeting 92 percent of quality requirements. With the installation of locally made livestock barriers to water sources, plus plans to develop infrastructure for watering livestock away from natural water sources, these results will keep improving. 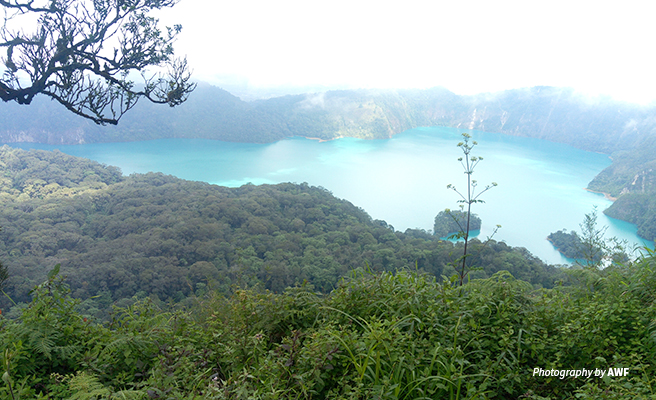 Forest protection strengthens the resilience of communities and ecosystems

To maintain this essential river system, AWF prioritized the protection of four critical forests in the Great Ruaha’s catchment area — the Poroto Ridge, Sawago, Ikhoho, and Chumvwi Forest Reserves. Apart from delivering sustainable support to Tanzania Forest Services, AWF is working with local government and community stakeholders to upgrade the status of Poroto Ridge and Sawago forests to nature reserves. Attracting additional conservation attention and larger annual budgets, the upgrade will secure greater protections, and secure long-term benefits for the people depending on the forests.

To this end, we developed four land-use plans and four forest management plans approved by relevant authorities. In addition, we have established about 32 sq. kilometers of community land and our support to the four forest reserves brings the total area of catchment forest under improved management to 120 sq. kilometers. Ecological monitoring is also heightened in the areas surrounding the reserves with the training of 25 village forest scouts, four Tanzania Forest Service officers, and two local government officers in the use of the Specific Monitoring and Reporting Tool (SMART) and CyberTracker technology. In line with AWF’s plans to develop the tourism potential of the landscape, we provided 25 scouts with the necessary skills, and trained 25 others on law enforcement to protect the forest.

As a result of these measures, most of the water sources that were previously dried up have now restored water flow which helps to increase dry season flows of local rivers feeding into the Great Ruaha River. Moreover, the combined effects of conservation-friendly agriculture and restoration of water sources have reduced pollutant loads in the water system, expanded forest cover, restored ecological integrity, and also improved water quality and flow — all while boosting community livelihoods.

Hailing from the Kilimanjaro region of Northern Tanzania, Godlisten joined African Wildlife Foundation as the Program Coordinator for the Reducing Emissions from Deforestation and Forest Degradation (REDD) program in 2010. In his current role as Program Manager, Southern Tanzania, he oversees AWF’s community-based water conservation initiatives in the region. Godlisten has more than 20 years of conservation experience and holds an M.S. in conservation biology from the University of Cape Town.