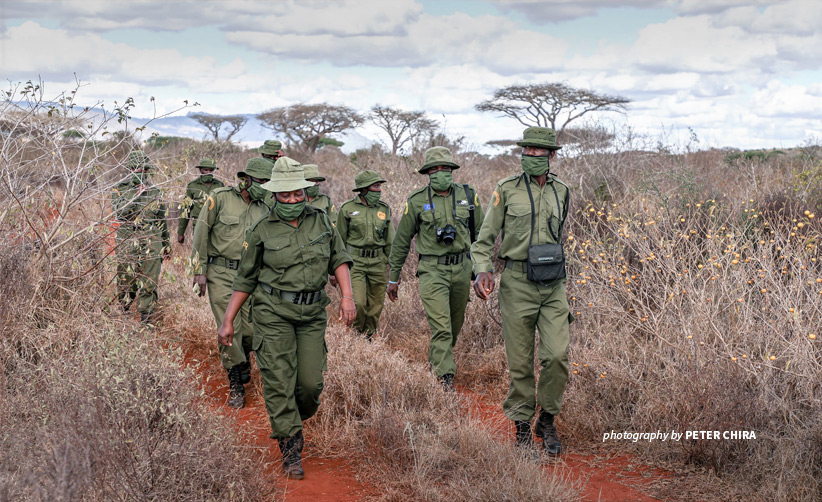 Consider the African wildlife ranger’s job — the long periods away from family and home, low pay, challenging physical conditions, and significant risk of armed confrontations. In 2018, more than 50 African rangers died in the line of duty, killed by poachers, elephant attacks, snakebites, and a myriad of other causes. The International Ranger Federation’s annually released roster of fatalities paints only a sliver of the picture, omitting the many rangers who suffered severe injuries during the year.

What drives these brave frontline soldiers in Africa’s war against poaching? Often, they are motivated by a deep love of wildlife and wild lands. “We, the people who work here, this job is in our blood,” says Philbert Mwasi, a scout at Kenya’s LUMO Wildlife Conservancy. “If we were to take a leave of absence from our work, we would not be at peace with ourselves.”

“I really like the work of rangers,” says another LUMO scout, Ludovika Malemba. “I was a game scout when I was in primary school— conservation is in my blood.” Although risk and hardship are part of the job description, rangers throughout Africa are under-resourced, especially compared to poachers working for international wildlife-trafficking networks. “In most confrontations, we face heavily armed, highly trained, and organized poachers — most of whom have a military background,” says Simon Muchatibaya, ranger and African Wildlife Foundation's Technical Advisor in Mana Pools National Park in Zimbabwe. Patrol units are most often teams of three, facing off against poaching groups of 10 or more. Sometimes lacking even essential resources such as reliable radios, “[w]e frequently find ourselves at a disadvantage and facing very real danger,” Muchatibaya says.

AWF supports training in Kenya, Uganda, Zimbabwe, and other African countries to ensure rangers and scouts have the best possible knowledge and skills. We also help wildlife authorities source new uniforms and state-of-the-art equipment such as satellite-based tracking devices and ruggedized smartphones. Our goal is for rangers and scouts to be safe, well-equipped, fairly compensated, and quartered in safe, useful ranger stations and barracks.

AWF also sponsored training for community scouts from LUMO and 50 community rangers from nine conservancies in Taita Taveta. The training focused on wilderness skills and first aid as well as localized topics such as grazing laws and group-conservancy regulations. The scouts learned how to effectively communicate and resolve conflicts with pastoralists who were illegally and persistently grazing livestock on LUMO land. Illegal entry into LUMO has since fallen off, scout Malemba says.

In September 2018, Ugandan President Yoweri Museveni was on hand for the graduation of 487 ranger recruits at Paraa Training Wing in Murchison Falls National Park. AWF worked with the Uganda Wildlife Authority to train and equip the agency’s recruits to collect field data and conduct ecological monitoring using the Spatial Monitoring and Reporting Tool (SMART) and CyberTracker technology. 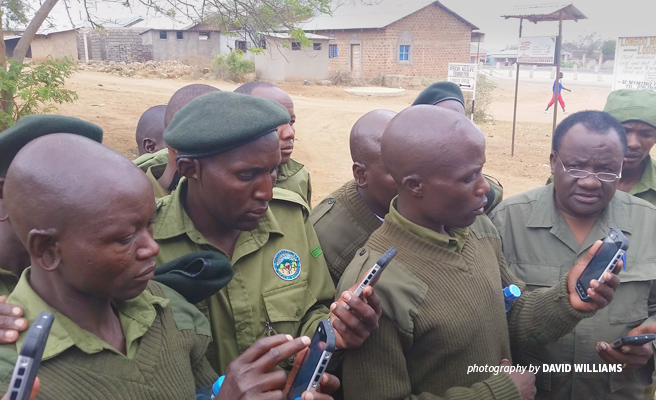 CyberTracker/SMART training is one of AWF’s most vital programs, the centerpiece of our strategy to improve protected-area management and conservation planning. CyberTracker is an app that allows rangers to capture critical field observations on a ruggedized smartphone. Notes are downloaded to SMART, a spatial software designed to manage patrol observation data. Rangers capture observations with a series of smartphone clicks, automatically recording the location and timestamp of conservation indicators such as wildlife sightings.

Back at field offices, data managers use the CyberTracker inputs to generate detailed analyses of wildlife and threat distribution and trends. “When they have accurate data from field and sky sources,” says AWF’s Senior Director of Conservation Geography David Williams, “the authorities can deploy their assets more efficiently, and they can track progress.

“The best part is that rangers tell us they can see the impact of their work in maps and charts and how that intelligence positively shapes operations. They feel more empowered and motivated.”

> Learn how AWF is supporting rangers and community scouts with health supplies, rations, and fuel to ensure patrols are safe and effective during the coronavirus pandemic