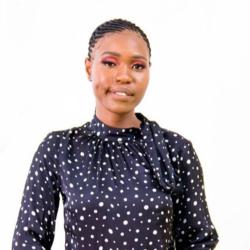 Ndanatsiwa Tagwireyi is AWF’s Communications Assistant based in Harare, Zimbabwe. She believes that communication plays an overarching role in wildlife conservation and sustainable development and has the power to transform lives.

This year, World Ranger Day ran under the theme ‘Diversity,’ encompassing the various geographies, terrains, climates, ecosystems, skills, equipment, and organizations that rangers across the world work with as noted by the International Ranger Federation.

Despite the complexity of tasks in the male-dominated ranger working environment, some women are breaking barriers and reversing preconceived ideas about the capabilities of women. Gone are the days when women’s roles were limited to childbearing, home administration, and unpaid care work.

Such is the story of 25-year-old Rosemary Kateguru, who stood against all odds in wildlife conservation circles by becoming the first woman holder of the Launch-Master Class One License to operate big boats and vessels in Zimbabwe. She is a ranger who operates in the Zambezi River Specialized Anti-Poaching Unit (ZARSAU) D Camp area in the Middle Zambezi Valley.

Kateguru, who hails from Kanyemba under Mariga Village in Mashonaland Central region was among the 18 launch-master coxswain trainees who graduated on December 16, 2021 at Lake Kariba. This came after an intense seven-week course made possible by  African Wildlife Foundation (AWF) in partnership with the Zimbabwe Parks and Wildlife Management Authority (Zimparks) courtesy of the Convention on International Trade in Endangered Species of Wild Fauna and Flora (CITES) MIKE grant. It is under the European Union.

Out of the 18 trainees from Zimparks and the Zimbabwe National Army, Kateguru outshone 15 men and 2 women rangers. In honor of her outstanding performance, the First Lady of the Republic of Zimbabwe Dr Auxillia Mnangagwa held a dinner ceremony for her and members of Kateguru’s Doma community (where she comes from) in February 2022.

“My award helped a lot in my community which is looked down upon, many people were happy that I uplifted the Doma people. I am still super excited because of what the First Lady did in honor of my achievement,” an elated Kateguru says.

Research indicates that the Doma people are a marginalized community, with many people living below the poverty datum line due to limited access to opportunities.

Kateguru says many people in Kanyemba now want to follow her footsteps as they are excited about her milestone, a development that calls for celebration in the field of rangers and wildlife conservation.

“Women used to think being a ranger is a job they could not do, they used to think that carrying a gun is difficult but now they see that it is possible,” she adds.

Her duties involve intensive anti-poaching patrols along the Zambezi River, focusing on the long stretch of more than 315 kilometers from the Kariba Dam Wall to Kanyemba. Water-related ranger work involves steering ships to carry out anti-trafficking patrols, responding to reports of wildlife crime and working with communities to reduce illicit wildlife trade. In addition, Rosemary also does anti-poaching patrols on land.

With three years of experience in working as a ranger from the time she started in 2019, she has gained a lot of experience as a member of a highly specialized river patrol unit, the first of its kind in Zimbabwe. However, she admits that striking a balance between motherhood and working as a ranger can be challenging at times. She spends more than a month without seeing her children and family while dedicating her life to conserving wildlife and ecosystems.

“Balancing between motherhood and work is difficult,” Kateguru says. “I only have time to spend with my two children during off days, after the patrols.”

Kateguru and her team usually conduct 14- and 21-day extended patrols in the Mid-Zambezi Valley landscape. AWF is aware of the difficulties faced by rangers in protecting wildlife and continues to support them through its partnerships with organizations like Zimparks.

“As AWF, we always strive to promote nature-positive social and economic development through building strong strategic partnerships with local communities and organizations like Zimparks,” Mufute said. AWF has taken a step further in not only supporting rangers to do their work but also looking into rangers’ welfare through the provision of ranger accommodation and other provisions that directly benefit them.

In 2020-2021, AWF provided a COVID-19 Emergency Response through supporting rangers with allowances, food, fuel, patrol rations, and personal protective equipment in protected areas in Zimbabwe. With consistent support for rangers, AWF is optimistic that wildlife conservation in the hands of rangers will keep moving in a positive trajectory.

Recently, Nyaradzo Auxillia Hoto of the International Anti-Poaching Foundation (IAPF) Akashinga Program, and the Anti-Poaching Tracking Specialists K9 Unit from Save Valley Conservancy were honored with the International Ranger Awards at African Protected Area Congress (APAC) in July 2022. This indicates that Rosemary Kateguru and other Zimbabwean women’s efforts in conserving wildlife are evident even on the continental level.