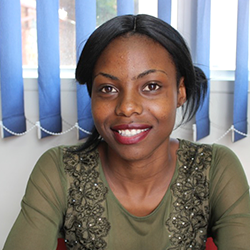 Shamiso Saburi is African Wildlife Foundation's Field Communication Intern based in Harare, Zimbabwe. She is enthusiastic about journalism and everything media-related. Shamiso finds deep satisfaction in discovering and sharing stories that educate, inform, and trigger people's interests and emot ... More

Young people in Zimbabwe’s Mbire District aspire to do more than just survive. Like their peers across the world, they want to thrive and prosper, and lead meaningful and modern lives. Unfortunately, opportunities do not always present themselves.

Desire Chisunga, a 31-year-old from Masoka Ward 11, was born and bred in Mbire. He was not lucky enough to complete his studies, dropping out just before his final year. He survived on piece work he got from farmers within his community, spending his days planting and weeding other people’s crops for little pay. His future looked bleak.

“I have always wanted to be a hairdresser. I spent a lot of time observing barbers in the community and dreamed of owning a barbershop one day. But, I just could not figure out how to get the resources to do it,” he says.

In 2018, Desire started working with his community and the African Wildlife Foundation to conserve wildlife. It was not his dream job, but it was a step up from his life as a casual laborer.

Alongside 75 others, he was nominated to become a community game scout spearheading community conservation in Masoka Ward. He trained for a month at the Mushandike College of Wildlife Management with full support from AWF. Desire learned how to safeguard wildlife and manage human-wildlife interactions and ensuing conflicts. After graduating from Mushandike, he hit the road running as a wildlife conservation champion, making outstanding contributions to the conservation of species and habitats in his community. He now had an opportunity to make a decent living while also doing meaningful work that would secure his children’s future.

In October 2021, Desire finally got the chance to live his dream. He opened his barbershop, having received two hair clippers, a small solar panel, power inverter, battery, and controller under AWF’s ‘Livelihoods and Conservation Enterprises for Game Scouts and Communities in Mbire District’ project funded by a generous AWF donor.

“African Wildlife Foundation has really transformed my life through their projects. I now have an alternative source of income apart from conserving wildlife. I am now capable of taking care of myself and family without struggling much,” says Desire.

He cuts hair for US$ 1 for adults and US$ 0.50 for children. By the close of November, he had made a US$ 20 profit from his small business. He used part of his earnings to buy a fan for the comfort of his clients battling Mbire’s sweltering temperatures.

The livelihoods project promotes wildlife conservation by reducing pressure on natural resources and enhancing sustainable livelihoods for game scouts and their respective communities. Thus, on top of being a conservation champion, Desire runs his small business and has found financial freedom and fulfillment; if income from conservation is affected by shocks and stresses such as COVID-19, he has a supplementary source of income.

The enterprise project has so far supported seven scouts through the distribution of equipment to allow them to run businesses. In addition, over 40 youths have benefited from trainings on online entrepreneurship resources such as Facebook pages, YouTube channels, and online forex trading among others. Additionally, 21 women are now making bar soap, petroleum jelly, and perfume for sale.

The project is directly supporting conservation initiatives too. For instance, it has facilitated the installation of satellite Wi-Fi hardware to support the transfer of data from the wildlife protection units in the fields to the central district units, easing communication, especially for poaching cases. In addition, young people and scouts in Mbire also access online entrepreneurship resources.

In 2020, the project supported four women scouts with allowances. Three of the them have used the income to build better accommodation for their families and one has bought a grinding mill to make maize flour. All four women now own cattle and are enrolled in school to improve literacy.

“The project has huge and long-lasting positive impacts on the livelihoods of the respective beneficiaries. We are looking forward to growing the businesses and have designed it in such a way that it is revolving to cultivate a culture of competence and business focus. This way, it will benefit more scouts and other youths in the communities. We are hoping to continue supporting entrepreneurship and support to women scouts,” says Collen Matema, AWF’s Senior Project Officer, Community Based Natural Resource Management in Mbire District.

The project has transformed the lives of communities and given them a fighting chance against poverty. Even in an area characterized by human-wildlife conflict, low and erratic rainfall, poor soils, and high temperatures such as Mbire, Desire’s story is proof that dreams can come true.

> Watch a short film about Edith John, a young woman serving her community as a wildlife scout in Mbire