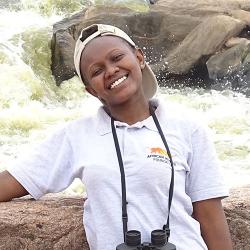 Christine Mwaniki is an intern with African Wildlife Foundation's Court Monitoring Program. She is a wildlife biologist and has previously worked at Kenya Wildlife Service in collaboration with Tsavo Trust in monitoring big tuskers and African cats in the Tsavo landscape. A lover of elephants, Ch ... More

In many of Kenya’s wildlife-rich landscapes today, despite the numerous efforts put in place by the government and other stakeholders, conservation continues to face challenges including habitat fragmentation and illegal killing of wildlife. Further, emerging technologies and tactics of the 21st century are launching wildlife crime into the digital arena. At the same time, disparities in penalties, as well as gaps in various wildlife management legislation and regulations, impede the prosecution of wildlife crimes.

In addition to this training, the officers took part in a mock trial, staged before guest magistrates and prosecutors from various courts in the Tsavo landscape. The mock trial aimed at addressing the challenges experienced in the investigation and prosecution of wildlife cases, including the role of KWS officers as witnesses in court.

AWF’s court monitoring program in Kenya's Tsavo region provides critical support to judicial officers, investigators, and prosecutors to ensure that wildlife cases progress through the landscape’s courts and deterrent penalties are meted. Voi Wildlife Lodge in November 2021, AWF brought together 40 members of the Kenya Magistrates and Judges Association and nine KWS officers for a workshop on wildlife crime in the Tsavo Conservation Area. The day-long discussions and presentations by KWS investigators and prosecutors were aimed at sensitizing members of the judiciary on wildlife crimes to ensure smooth adjudication of wildlife cases.

The dik-dik is targeted by poachers in the Tsavo landscape

Additionally, AWF arranged a game drive in the Tsavo East National Park to expose the magistrates and judges to the landscape. They learnt that while poaching for wildlife trophies such as elephant ivory and rhino horn continues to follow a declining trend, illicit bushmeat cases and illegal grazing have been on the rise over the last year as result of the rising demand for bushmeat and the prolonged drought seasons experienced in the landscape. In his overview of the court monitoring program, AWF’s Benson Kasyoki noted, “Antelope species are the most impacted by bushmeat trade in Tsavo, with the dik-dik taking the lead.”

“Digital platforms are increasingly in use for interaction across Africa. This has created an easy conduit for conducting illicit wildlife trade,” AWF’s Cybercrime Manager Ernest Agina notes. The use of mobile phones as a means of communication by wildlife crime offenders is increasingly common. Wildlife criminals use transportation like motorbikes to ferry the illegal contraband across the Tsavo landscape.

During the digital and electronic evidence training at the KWS Law Enforcement Academy, Agina explained to the 109 junior officers that such evidence is fragile. “Hence, first responders need to understand the process of collecting, preserving, and submitting it for forensic examination,” he noted.

Over 100 KWS officers completed training on digital and electronic evidence

The 7-day training intended to address gaps experienced by frontline law enforcers as first responders to wildlife crimes, particularly those that contain digital and electronic evidence. Apart from being thorough at the crime scene, first responders must ensure that witness statements are elaborate and drafted independently. This keen attention to detail goes hand in hand with the need to be conversant with the Wildlife Conservation and Management Act, 2013.

Additionally, AWF facilitated sessions to improve how the officers appear as witnesses in court. While conclusiveness and confidence are imperative when testifying in court, the likelihood of convicting an offender highly depends on role of the officer as a witness in a wildlife crime scene. The witness needs to clear all doubts when testifying before the court, whilst being specific about all details recorded at the crime scene and providing all the information acquired at the scene of the crime. The mock trial with members of the judiciary provided an opportunity for the officers to sharpen their ability to answer questions logically and thoughtfully, at a reasonable pace, and in a language the accused person understands.

Improving awareness of wildlife legislation and conservation issues among the judiciary is a key objective of AWF’s court monitoring program, with multiple initiatives running concurrently. In June and September 2021, AWF hosted various local stakeholders from the Mutomo and Taveta courts in the Tsavo landscape for learning sessions and exposure tours with KWS experts.

In his address to the Kenya Magistrates and Judges Association, KWS Tsavo Conservation Area Prosecution lead Kiplagat Talam gave an overview of the amended Wildlife Conservation and Management Act of 2019, which clearly discloses the punishment for offenses involving endangered species under section 92 of the Act. Offenses regarding critically endangered or endangered species are categorically defined and hefty penalties provided. For example, killing an endangered species attracts a mandatory 7-year imprisonment without an option of a fine. “In addition, the amendment has brought about an expanded scope of protected areas to include conservancies and sanctuaries,” he said.

Justice Oscar Angote, in his remarks during the workshop, said, “Together, we will continue engaging, sharing, and applying what is learnt in our daily operations in the courts and therefore invite AWF to extend trainings to land and environmental courts across the country.”