It is early evening at Taita Ranch, which lies adjacent to Kenya’s biggest national park, the Tsavo. We drive slowly along the bumpy roads in the 98,000-acre conservancy, stopping to peer into bushes, alert for any signs of movement. We are looking for giraffes. They are usually in plenty, visibly towering over the shrubland and quietly grazing on the choicest leaves on the tops of trees, but today they are proving uncharacteristically elusive.

Perhaps it is just bad luck but it feels particularly ominous that after two hours of looking, we do not sight a single one. Our guide is equally puzzled. He insists that the ranch is home to hundreds of giraffes and finding them is child’s play. In fact, they are so used to human presence that they lend themselves to all the photo opportunities that tourists could want. Today is not our day, however, and I wonder whether our fruitless search has something to do with declining giraffe numbers across the continent.

The latest figures put giraffe populations in Africa at less than 100,000, which is in stark contrast to the current elephant population of around 415,000. This means that there are more than four times as many elephants as giraffes, yet the conservation status of giraffes has not managed to grab the same attention. Giraffes, often overshadowed in conservation efforts by the iconic members of the Big 5, are facing a quiet extinction.

In August 2019, however, member states at the 18th meeting of the Conference of the Parties to the Convention on International Trade in Endangered Species of Wild Fauna and Flora (or CITES) held in Geneva, Switzerland, voted to restrict the sale of giraffe parts. Giraffes were added to Appendix II of the Convention which means that although some form of international trade in the species is still allowed, the regulations are now much tighter.

All nine subspecies of the giraffe across its range states enjoy this new protection, which is expected to counter their fast plummeting numbers. 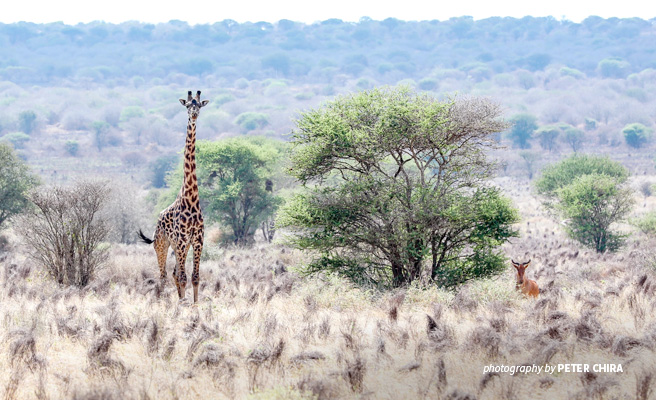 But international policy by itself is not enough to turn the tide. African Wildlife Foundation joined Kenya Wildlife Service and other partners in November 2018 to launch a four-year giraffe conservation strategy. The Recovery and Action Plan for Giraffe in Kenya takes a holistic approach to conservation, prioritizing enhanced species protection, improved land management, coordinated research and monitoring of giraffe populations, as well as education and awareness.

Under this strategy, AWF is mapping the threats facing giraffes within the Tsavo-Mkomazi landscape. Loss of giraffe habitat has been found to be chiefly responsible for their declining numbers as it puts giraffes into direct competition with people for limited natural resources. According to a report by the Giraffe Conservation Foundation, “wholesale changes in land-use and land tenure, particularly the introduction of crop farming, logging, charcoal burning, [and] the development of urban centres” have caused the fragmentation of habitats and disrupted wildlife movements. This, coupled with the ever-growing threat of poaching for game meat, continues to push giraffes further into decline.

“People refer to a giraffe as a ‘motorbike’ because the money that one gets from the sale of its meat is enough to buy a motorbike,” says Kenneth Kimitei, AWF’s Landscape Ecologist in Tsavo-Mkomazi.

“The meat is transported to major towns including Nairobi and Mombasa, where it is then sold to consumers. One giraffe carcass fetches between USD $600 and USD $700 on the market,” he adds.

Giraffe meat seizures are common. Kenyan newspapers reported last year that 800 kg of giraffe meat was impounded at Burma Market, one of Nairobi’s biggest meat markets, and there is an ongoing court case involving the confiscation of another 500 kg in Voi County. Investigations found that the meat is commonly disguised as beef. And earlier this year, Kenya’s only white female giraffe and her calf were killed by poachers, leaving a lone surviving bull.

AWF’s latest data suggests that giraffe is the second most sought after meat after the dik-dik in the Tsavo Conservation Area. To support the prosecution of wildlife crime offenders, AWF has been monitoring court cases within the Tsavo Conservation Area in four courts – Voi, Taveta, Makindu, and Wundanyi. Some 229 cases of illegal activities in the park and ranches were taken to court from September 2019 to November 2020. Out of these, 70 bushmeat cases involving impala, dik-dik, oryx, giraffe, and eland have been concluded. Sentences ranged from USD $200 to USD $2,000 worth of fines. 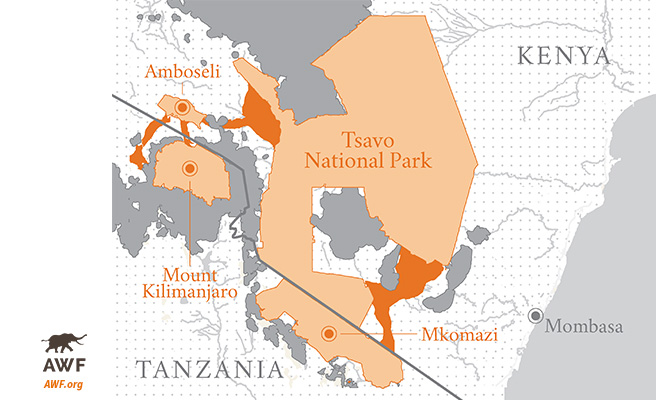 African Wildlife Foundation works with partners in Kenya and Tanzania to conserve wildlife and wild lands in the transboundary Tsavo-Mkomazi ecosystem.

The frequency of giraffe meat poaching is in part due to the fact that most of Kenya’s giraffes are found outside protected areas, on community grazing lands, which puts the animals in close proximity to people, who hunt them for protein. In addition, research suggests that growing human populations and expansions of agricultural land have led to depressed giraffe fertility rates.

“As human populations increase, we convert wildlife habitats into human settlements. We are building houses and roads, all of which are incompatible with the environments that wildlife needs to thrive,” says Kenya Wildlife Service Assistant Director General in charge of the Tsavo Conservation Area, Robert Njue.

However, the continuous prioritization of human economic development over nature is a distorted binary. Africa cannot fully realize her potential for development and prosperity without the wildlife and wild lands that make up such an important element of the continent’s culture and identity, as well as protects the ecosystem services that water and feed the continent’s growing population.

“Human beings are intricately linked to their environment. So the choice between development and conserving nature is a false choice. We need to do both,” says AWF’s Vice President for Species Conservation and Science, Dr Philip Muruthi.

The program has also sought to understand how local communities perceive giraffes, the benefits they get from them, and any harm that they cause. “Most of our respondents report peaceful coexistence with giraffes since they do not directly cause human-wildlife conflict, unlike carnivores like lions. Additionally, respondents indicated that poaching and drought are the most severe threats to survival of giraffe in the landscape,” says AWF Species Conservation Assistant Amos Muthiuru who leads giraffe conservation work in Tsavo with support from the Daniel Maltz Foundation, Horne Family, and Columbus Zoo.

“However, there is need to demonstrate a better link between giraffe conservation and benefits to communities. People are ambivalent about giraffes because they do not feel like they benefit directly from conserving them, for example through revenues earned from tourism,” he explains.

We finally chance upon herds upon herds of giraffes when we visit Tsavo West National Park. As we watch the peaceful ruminants stand sentinel over the shrubland while chewing on leaves and shoots, we find it hard to believe that we could be looking at the last of what used to be among the most abundant wildlife in the African savanna. It will take concerted efforts from conservation partners and communities to ensure that giraffes are with us for generations to come.