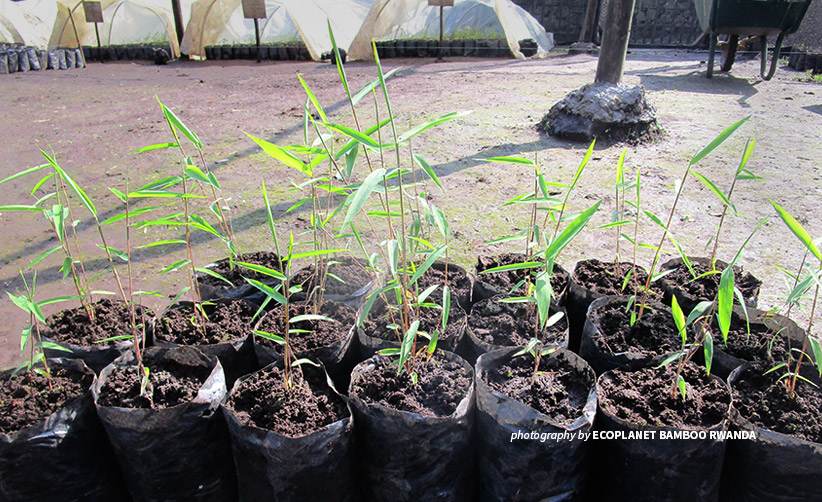 Before African alpine bamboo grows into the tall, verdant stands clustered across high mountain forests, it starts off as a fragile shoot from a seed so tiny that it is invisible to the naked eye.

The young plants of Yushania alpina, ranging from 2-10 centimeters in height, are known as wildings. Twenty thousand of these shoots have been collected from Kenya’s Aberdare Range, raised in a holding nursery there until they were strong enough to be flown to a special bamboo nursery in Kinigi, Rwanda.

Their final destination is the Volcanoes National Park, where 22,000 young bamboo trees will be planted to restore 27 hectares of land adjacent to the protected area. African Wildlife Foundation donated this parcel of land to the Rwanda Development Board in 2018 to expand the national park, which supports the largest population of endangered mountain gorillas — the backbone of Rwanda’s wildlife tourism industry.

Working closely with the Rwanda Development Board, AWF has partnered with EcoPlanet Bamboo Rwanda to implement ecological restoration plans for Volcanoes National Park by planting Yushania alpina in the protected area. In addition to the reforestation efforts, the Rwanda Development Board is also establishing bamboo cultivation projects for communities living around the park. As part of Rwanda’s green growth strategy, investment in bamboo-based enterprises — from nurseries to processing plants — create new opportunities for Rwandans to develop sustainable business models and build the bamboo sector. 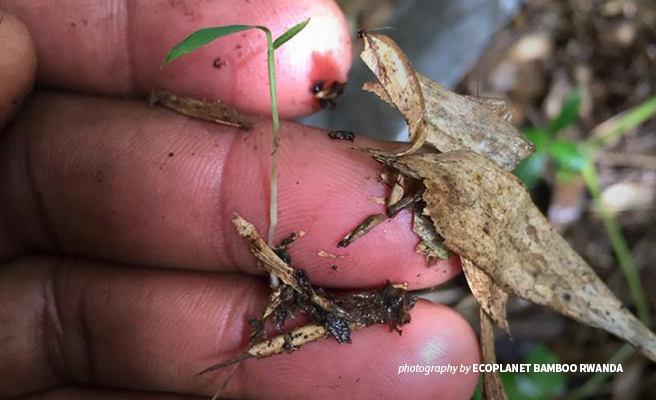 Bamboo wildlings collected from the Aberdares region in Kenya will mature at a nursery in Kinigi, Rwanda before being planted in Volcanoes National Park

African alpine bamboo is the only indigenous bamboo species in Rwanda’s Volcanoes National Park. It is the foliage of choice for the protected area’s 700-plus mountain gorillas and golden monkeys, and a significant part of its tropical montane rainforest ecosystem. Yushania alpina is also found further east in areas of higher altitude in Tanzania, the Mt. Kenya and Aberdares regions of Kenya, as well as in Ethiopian highlands.

The flowering pattern of Yushania alpina is widely undocumented but has generally been observed to occur sporadically with no predictable pattern of when or where flowering may occur. As a result, seed or wilding collection can be very challenging, resulting in other locally preferred propagation methods such as rhizome cuttings. Unfortunately, taking rhizome cuttings from mature bamboo plants have proven to be largely unsuccessful, and ultimately not viable for more expansive ecological restoration plans, as removing large volumes of bamboo rhizomes can be invasive and damaging to the mother plant.

Being difficult to propagate and cultivate, Yushania alpina has not been considered a commercial bamboo species in Rwanda and is rarely utilized for forest landscape restoration. Samantha Wilde-Meiring, General Manager of EcoPlanet Bamboo Rwanda, notes that research on this species is limited to studies on growth patterns and its importance in mountain gorilla diet. “So we’ve been looking at how to cultivate this species and be able to propagate it so that you can use it for restoration,” she says.

Ideally, seeds would provide the highest genetic diversity and are the most cost-effective method for forest landscape restoration of this scale. But EcoPlanet Bamboo Rwanda, working with park rangers, have not found flowering plants that are producing seed or wildings in Volcanoes National Park. Plant tissue culture is the next frontier for both EcoPlanet Bamboo Rwanda and forest restoration, says Wilde-Meiring: “Where you don’t have seed or other propagation material, tissue culture becomes a solution to overcome this.”

Production of Yushina alpina from tissue culture — which involves replicating plants from cells or tissue under highly controlled, sterile conditions — has not been successfully attempted in Rwanda or globally. With the help of a specialist based in China and support from AWF, EcoPlanet Bamboo Rwanda is set on discovering the suitable processes and protocols — everything from the best growth medium and the life cycle of the tissue culture to how the new shoots, or ‘plantlets,’ will interact once they enter the nursery.

While this process is still in an early phase of research and development, investing in plant tissue culture for bamboo propagation aligns with Rwanda’s large-scale ecological restoration plans. Patrick Nsabimana, who is coordinating the Rwanda Development Board’s Volcanoes National Park Expansion Program, notes, “It has been difficult to get wildings and other tree source materials for this specific restoration.” However, he believes the 27-hectare parcel near the park provides a trial run for the restoration of native species and a seed bank of native African alpine bamboo. “We are expecting an increase in gorilla populations and also other mammals, so this is the right time,” he says. “Once this small project is successful, it will serve as a tree seed source.” 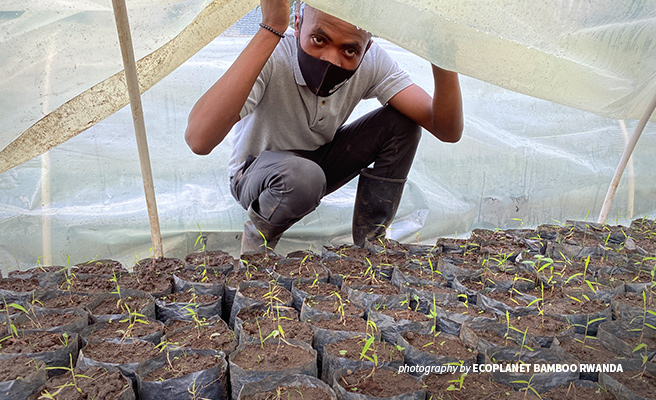 Of the 22,000 bamboo plants needed to reforest the 27-hectare sector of Volcanoes National Park, a small proportion will be plantlets from the tissue culture trial but they can take almost a year to move from laboratory to nursery. In the meantime, the 20,000 wildings from Kenya will continue to mature at EcoPlanet Bamboo’s nursery before they are planted in Volcanoes National Park during the upcoming February-March bamboo planting season.

It took nearly three months to collect 20,000 wildings from community lands in the Aberdares, but they could not leave Kenya until COVID-19 flight restrictions eased in August. “We were initially planning on bringing them in as bare root plants and putting them in the soil here at the nursery [in Rwanda],” says Wilde-Meiring. Instead, the team developed a holding nursery near the collection point in the Kenya highlands and managed initial plant development before they were finally exported. In August, 11,200 wildings arrived in the nursery with the remaining wildings arriving later this month.

EcoPlanet Bamboo Rwanda’s nursery is just 200 meters from the final destination of the young Yushania alpina plants — the 27-hectare extension to Volcanoes National Park. The 1000-meter sq. plot used for the nursery is leased from a local couple, and 16 community members were employed to prepare the land and set up the infrastructure before the wildings arrived. EcoPlanet Bamboo’s Kinigi-based technician is also training nine full-time workers on plant handling at every stage of the process — from transplanting the wildings to watering the young plants and keeping them pest-free.

The close proximity of the nursery to the national park is not just a logistical benefit. Says Wilde-Meiring, “One of the nice things is that because the nursery is in the location of the [plantation] itself, it allows for continuation of employment for those who have worked at the nursery.” They can eventually contribute to the planting of the 22,000 bamboo plants in Volcanoes National Park, and help restore an essential forest for generations to come.