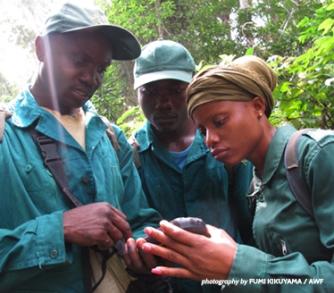 With its accessibility to Cameroon’s capital city, as well as its proximity to white-sand beaches, Campo Ma’an National Park is ripe with tourism potential. This forested park boasts a variety of species, including the forest elephant, pangolin and leopard. It is also among the few places in Africa where gorillas and chimpanzees coexist—an alluring characteristic for wildlife enthusiasts.

Nearby development is also establishing some of the necessary infrastructure to support tourism. Roads, for example, are needed to travel into national parks, and infrastructure that enables electricity or running water will also help the park more readily attract travelers.

But development can also spell danger for a vast protected area unaccustomed to human incursions.

Already, human population growth near Campo Ma’an has led to a spike in poaching and illegal wildlife trafficking. The park’s wildlife authority, however, lacks the resources and technical capacity to adequately monitor and protect its wildlife.

Through a Species Protection investment, AWF has provided the wildlife authority in Campo Ma’an National Park with much-needed, advanced ecological monitoring equipment. These tools, along with training on how to leverage them, allow rangers to collect data on smartphones in the field. This data is then rapidly analyzed to maximize anti-poaching patrol efforts.

Working together, AWF and the wildlife authority have targeted a 650-sq.-km section of Campo Ma’an to double down on their anti-poaching efforts. The work is yielding results: Over an 18-month period that began in January 2015, rangers removed more than 500 traps and snares, dismantled 59 poaching camps and seized 200 kg of bush meat.

Patrols have continued to increase, allowing the authority to establish a greater, more consistent presence in the reserve. At the same time, the information collected on these patrols has led to the development of a monitoring database that allows AWF and the wildlife authority to better understand the wildlife abundances within Campo Ma’an National Park—and jointly determine the most effective routes for anti-poaching patrols based on locations of threats.

Combined, these efforts are helping to fortify the anti-poaching patrols in Campo Ma’an—and setting the stage for possible tourism opportunities in the future.