African Wildlife Foundation has worked with Cameroon’s Ministry of Forestry and Wildlife in this landscape to improve the authority’s capacity to direct biodiversity conservation in Faro National Park with support from the European Union. To improve wildlife monitoring efforts, AWF has installed over 40 camera traps in various sectors of the park and helps manage the image database for the protected area. At the same time, the authority’s rangers are conducting regular patrols within the park to boost the protection of large and medium-sized mammals, from small antelopes to big cats and elephants.

Though different in size and shape, antelopes across Africa suffer population declines due to habitat degradation and pressure from poaching. Learn more about the antelope species from the images collected by AWF-installed camera traps between September and November 2020.

Easily confused with the sable antelope, this wide-ranging species stands out because of its reddish hue and the fringe of gray-brown hair trailing down its neck. Like the sable, which has a dark-brown coat, it is a member of the Hippotragini tribe, a group of antelopes that are horse-like in appearance. The roan antelope has a striking black-and-white patchwork face and curved horns that arch backwards. Both sexes of this species display little difference, except that male roans have larger horns.

Hippotragus equinus is one of the larger savanna antelopes, close in size and weight to the eland, the bongo, and the kudu. The roan antelope’s muscular built and territorial nature make it a difficult opponent, not to mention their horns — that can span upwards of 50 cm to a meter — and a unique stabbing method forms a strong mode of defense.

The roan antelope prefers to graze in lightly forested woodlands and shrub, grouped in small herds of not more than 20 antelopes. It is not a migratory antelope and six subspecies are recognized in different segments across its geographical range in West and Central Africa, Eastern Africa, and Southern Africa. Although this antelope is found in more than 30 countries, Cameroon and Burkina Faso, Zambia, and Tanzania are home to one-third of the remaining population, which is close to 60,000.

Also known as the kéwel, Tragelaphus scriptus is a distinct species from the Cape bushbuck, or imbabala, even though they are closely related and their geographical range overlaps. This spiral-horned antelope is one of three in the tribe Tragelaphini found across sub-Saharan Africa, and one of the smallest in the group.

White spots and vertical stripes adorn the flanks of both male and female kéwels, but the pattern varies depending on the geographical location and the subspecies. The color of the harnessed bushbuck’s coat is also on a spectrum, covering shades from light to dark brown with a red tinge in some populations.

The harnessed bushbuck is common across the Sahel, found from Senegal — where its alternate name kéwel originates — to Ethiopia. Its range extends southwards up to Angola, with some subspecies venturing into the tropical rainforests and river basins of Central and West Africa. 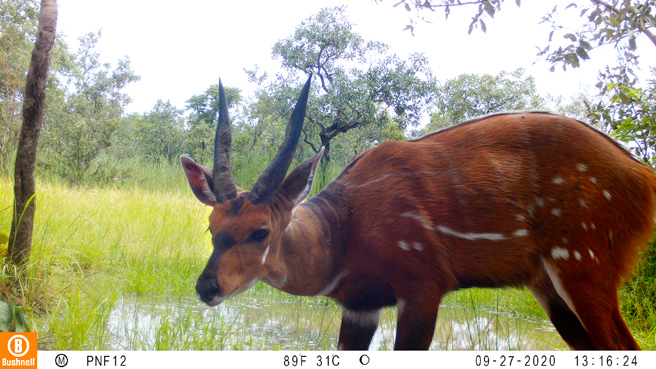 Waterbucks are large antelopes of the Kobus genus, one of six species that are distinguished by their preference for marshy habitats near water and grassy floodplains. Only male waterbucks feature the large curving horns and are heavier and taller than female waterbucks.

Kobus ellipsiprymnus gets its name from the distinctive marking encircling its tail. The 13 subspecies of this antelope are grouped in two varieties: the common waterbuck and the defassa waterbuck. The difference between both groups is evident in the dimensions and appearance of the antelopes — common waterbucks are taller but defassa waterbucks have longer tails. However, the easiest way to tell them apart is by the elliptical impression on the rump, which appears as a white ring of hair in the common waterbuck but a solid white patch for the defassa.

Another noticeable, and unfortunate, difference between the common waterbuck and Kobus elypsIprimnus defassa is the status of their populations. Although sizes are decline across the board, defassa waterbucks are classified as Near Threatened with a decreasing population of 60,000 - 80,000 individuals. 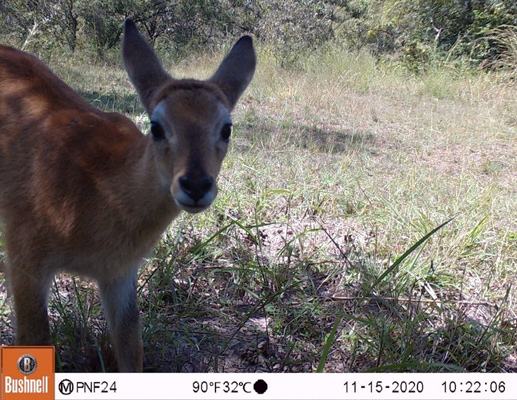 Duikers belong to a subfamily of Cephalophines — referring to the short crest of hair springing from the head — comprising 22 species of small, nimble antelopes. They are known for being easily alarmed and extremely shy, earning the epithet ‘diver’ or ‘diving buck’ in Afrikaans for deftly avoiding threats or agitation in their immediate environment. With their distinctive zigzag run, they can evade predators quickly and take cover in the nearest vegetation.

The common duiker is the only species of Sylvicapra grimmia in the subfamily, and is also known as the gray or bush duiker. More than 10 major subspecies occur across its wide range across sub-Saharan Africa savanna landscapes. However, the common duiker is not found in dense tropical forests in West and Central Africa, nor the arid extremes in the eastern and southern regions of the continent.

Depending on its geographical location, the common duiker’s coat can range from from a gray to light brown (in drier climates) though some forest populations in Angola are chestnut. The female common duiker is slightly heavier and taller than the male, and both have straight, pointed horns but they tend to be less developed or stunted in females. A smudge of soft fur stretches from its small forehead and darkens at the nose.

The common duiker is territorial, relying on a pungent scent secreted from glands in the dark-brown sockets of its wide-set eyes. Being browsers, they prefer to forage for leaves and fruits in shrubland and lightly forested areas that can also provide sufficient shelter from large carnivores — and also jackals, pythons, and eagles that are known to prey on this antelope. Notably, Sylvicapra grimmia is an omnivorous antelope, occasionally adding small insects, lizards, and even birds to its diet. 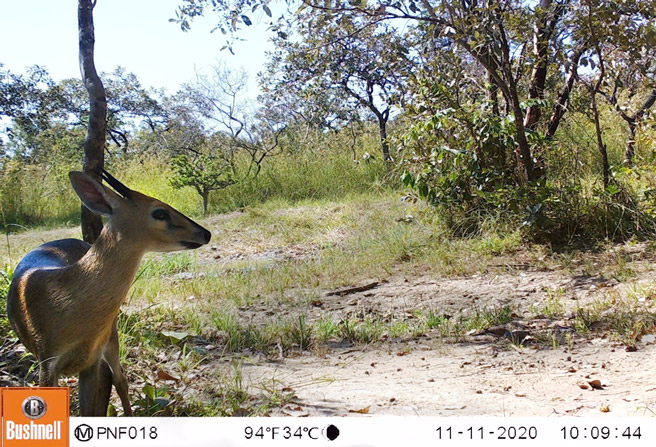 Cephalophus rufilatus is a forest duiker, easily distinguished from the common duiker by the stroke of white hair on its spine and a rich, russet coat. It is also different in build, with shorter legs and a curving back, making it one of the smallest antelope species. However, it has the largest preorbital scent glands of all forest duikers, appearing as a characteristic dark slit under the eye.

There are over 15 different types of forest duiker, found in various landscapes across the continent. As their name suggests, they have a preference for dense forests in lowland and montane regions. The red-flanked duiker is the only species of forest duiker that has adapted to savanna conditions. These duikers thrive in open woodlands near forests (so they can hide) and near a water source, typically rivers. Cephalophus rufilatus is native to many countries in West and Central Africa; they can be found all the way from Senegal to Uganda and South Sudan. Some scientists have delineated the boundary of the western and eastern populations as the Chari River flowing through Cameroon from the Republic of Congo to Lake Chad. 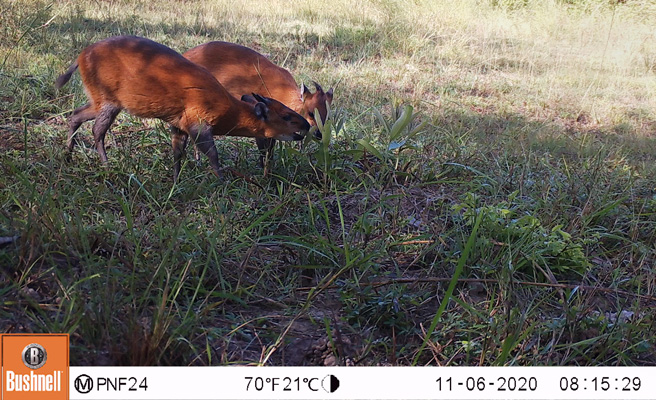 Faro National Park is also home to many more unique wildlife species in addition to these fascinating antelopes. Big cats such as the lion and leopard are also found in the protected area, which is known for the hippos on Faro River as well as elephants, black rhinos, and the African forest buffalo.