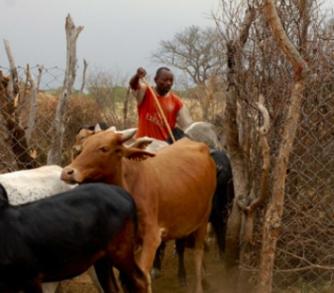 Lion populations across Africa face many threats to their continued existence. Habitat loss, disease, and violence all threaten the future of these majestic predators. In the Maasai Steppe Heartland, lions are often targeted for death after killing livestock or scaring local pastoralists. As a result, lion numbers are decreasing, as humans and carnivores grow to be more at odds with each other.

Involving pastoralist communities is critical to the success of any lion conservation initiative. Because retaliation is the primary motivation for killing lions, one strategy for reducing human-lion conflicts is to improve livestock security by reinforcing the enclosures where livestock are kept at night (called bomas) with chain-link fencing. (Traditionally, the Maasai use the wood of acacia trees, which has not proven sufficient in preventing enterprising lions from attacking.)

This method of making bomas predator proof can be expensive for pastoralist families, so African Wildlife Foundation supports them through a cost-sharing program. This has greatly reduced the number of livestock eaten by lions and, as a result, has also decreased the number of lions killed in retribution.